Beach Babes From Beyond R

They Boldly Go Where No Woman Has Dared Go Before! 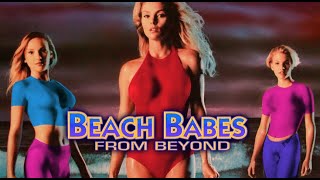 An intergalactic babe borrows her dad's T-bird ship to do a little planet hopping with her two friends, but they run out of fuel unexpectedly, and must land on earth. They land on the California coast and run into some guys, where they have fun and a few close encounters at the beach. One of the guys' Uncle Bud, who just wants to meditate and hang out, is being threatened with condemnation of his beach house unless he puts some money into repairs. The alien babes offer to enter the bikini contest with their way-out designs to try and win the money he needs, but they are hampered by the garment designer who will stop at nothing to win.

When three busty aliens splash down on planet earth the first thing they do is enter a bikini contest. The film features several relatives of actual movie stars.

28%off
Slave Girls from Beyond Infinity
$10.70 Super Savings
Add to Cart

15%off
Cowboys vs Dinosaurs
$21.20 Super Savings
Add to Cart