He's the toughest cop on the planet Arturus -- but on earth he's in over his head! 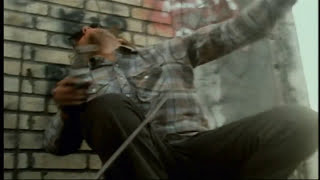 "Elections are next week and I don't need dead fat ladies on video screen all over the city." (Mayor to Police Captain)
"Disappointed you didn't get to kill anyone tonight, Bardo' You're through, you God-damn psycho! And take off those sunglasses. It's night!" (Mayor to Bardo)
"Giants. A place full of giants. I hate giants." (Bardo)
"So Debi, tell me size doesn't count." (Bardo to Debi)

Brick Bardo (Tim Thomerson) is a traveler from outer space who is forced to land on Earth. Though regular sized on his home planet, he is doll-sized here on Earth, as are the enemy forces who have landed as well. While Brick enlists the help of an impoverished girl and her son, the bad guys enlist the help of a local gang, led by Braxton Red (Jackie Earle Haley). When word leaks out as to his location, all hell breaks loose. Brick is besieged by an onslaught of curious kids, angry gang members, and his own doll-sized enemies, and he must protect the family who has helped him and get off the planet alive.

A 13 inch tall alien cop from the planet Arturus accidentally lands on Earth in the midst of a Bronx gang war. He doesn't let his height stand in his way as he takes on drug lords and street thugs in order to help a local activist clean up the neighborhood.

Brick Bardo, the "Dirty Harry" of the planet Arturos, finds him stranded on earth, after chasing his arch-enemy, Sprug, through space. Stuck in the South Bronx, Bardo, now a "13-inch cop with an attitude," teams up with a single mother who is trying to rid her neighborhood of crime.