Birth of a Nation (Silent) 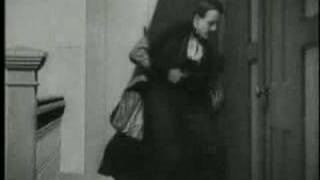 After watching D. W. Griffith's epic in 1915, President Woodrow Wilson declared, "It is like writing history with lightning. And my only regret is that it is all so terribly true." Meanwhile, the NAACP organized protests with regard to its portrayal of African-Americans. Today, this milestone of early cinema retains the power to move us emotionally, intellectually and politically.

Griffith has been called the "Father of Film." A failed actor and playwright, Griffith came to the Edison Studios in 1907. From 1908 to 1914, he directed 500 films. Constantly experimenting with, and innovating, film technique, his work culminated with the masterpiece The Birth Of A Nation, the first American full-length motion picture.

Based on stories by Thomas Dixon, this Civil War epic involves the struggle of two families: the Camerons from the South and the Stonemans from the North. Like Mathew Brady photographs brought to life, the film contains splendid, authentic recreations of major moments from the war - the assassination of Lincoln, the surrender of Lee at Appomattox, Sherman's march to the sea and heart-wrenching battle scenes. It is the film's second half, which deals with Reconstruction and the rise of the Ku Klux Klan, that has created the greatest debate. Griffith would make Intolerance a year and a half later as a response to the controversy his film caused.

This landmark film from silent director D.W. Griffith was the first movie blockbuster. However, it also reveals a horribly racist version of American history. The first part of the film chronicles the Civil War as experienced through the eyes of two families; the Stonemans from the North, and the Camerons of the South. Lifelong friends, they become divided by the Mason-Dixon line, with tragic results. Large-scale battle sequences and meticulous historical details culminate with a staged re-creation of Lincoln's assassination. The second half of the film chronicles the Reconstruction, as Congressman Austin Stoneman (Ralph Lewis) puts evil Silas Lynch (George Siegmann) in charge of the liberated slaves at the Cameron hometown of Piedmont. Armed with the right to vote, the freed slaves cause all sorts of trouble until Ben Cameron (Henry B. Walthall) founds the Ku Klux Klan and restores order and "decency" to the troubled land. While THE BIRTH OF A NATION was a major step forward in the history of filmmaking, it must be noted that the film supports a racist worldview. But there is no denying that it remains a groundbreaking achievement, setting a high watermark for film as an art form.

D.W. Griffith's film tells the story of two families, one Northern and one Southern, facing the Civil War and Reconstruction periods. The Camerons, headed by "Little Colonel" Ben Cameron, and the Stonemans, headed by politician Austin Stoneman, have been friends for years, but find themselves on opposite sides of the battle lines when the war comes. The Civil War exacts a personal toll on both families, only to be followed by the equally destructive Reconstruction period. Griffith links the consequences of the war with the formation of Ku Klux Klan and Lincoln's assassination.

Customer Rating:
Based on 27069 ratings.


This is the first film I've purchased from Alpha and I'm pleasantly surprised.

I'll pass on reviewing the content of the film because its all been done before.

For the most part pd dvds are released with one thing in mind...put as little time/money/effort into a release and get profit by keeping the price in the bargain bin.

Not this dvd! The film comes on a dual layer dvd with the movie clocking in at about 5.4ish GB by itself. With a running time of over 3 hours the extra space of the disc help greatly with the image quality. By no means is this a perfect/restored film...it has its flaws but at this price point you can't complain.

Oh and the cover art is a cut above most pd dvds.


Yes, there is still a lot of controversy around this film nearly 100 years after it premiered. But on a cinematic level, this was the first real "movie". It is surprisingly effective and for a silent movie the acting is amazingly subdued. Techniques devised by Griffith are still in use today. The long shots here are sweeping and every close-up has a meaning. Politics right or wrong, this film is about people first. A word about this DVD: I state without reservation that this is absolutely the best print of Birth of a Nation that I have ever seen. Clearly pieced together from several available prints, some of it is crystal clear; all of it is easy to watch and in the correct speed. For $5, own a piece of cinema - and American - history. Show this film to the kids and then use it to launch a discussion on some very dark times in our nation's past.


Having given this film a mediocre rating, I should tell you that there is nothing mediocre about it.

First, the movie-making firsts in this movie are astounding. Search the web and you'll doubtless find lists from around the world, including major universities, declaring the many innovative techniques that were used in this film. The one item that I didn't find listed was that this movie had an ensemble cast, long before that genre became common. Each member rises to the forefront of the film's action when called upon, then fades into the background as another story line is given attention. And this version of the film is in incredibly good shape for a 90-year old film.

But sadly, this movie is blatantly racist. The intertitles try to disclaim the racism, but those claims are simply unbelievable. Historically, it is fact that this movie spurred renewed interest in the Ku Klux Klan at a time when it was destined for obscurity. The hate and suffering fostered by this movie cannot be denied or dismissed; the Klan still uses this film as a recruiting tool.

D. W. Griffith, like Woodrow Wilson, had the misfortune of seeing the evils of reconstruction in the post-war South without first seeing the greater evils of slavery. It gave them both a distorted view of race relations in America (Wilson is credited with renewing segregation in the executive branch after every president since Lincoln had tried to reverse it). And thanks in part to this movie, those distorted views survive among us to this day. But avoiding this movie, or demanding that no one else ever see it, will not make anything better. It is a landmark film in movie-making history and should be treated as such; however, while pointing out its incredible accomplishments, the racism it portrays should be exposed for what it is. And don't be surprised if it makes you feel angry.

As for me, I was stunned. Completely. On both counts.