The One Who Dares The Bloodthirsty Barbarians! 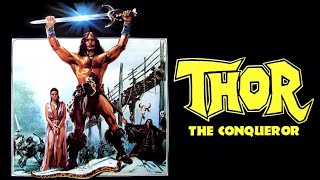 A tale of mythology and magic, of how Thor, a legendary god triumphs over overwhelming odds to great victory and the destruction of his foes. His parents slain at birth, Thor is raised by Etna, the birdman. Taking the beautiful warrior virgin, Ino, as his companion, his exploits lead to a confrontation with Gnut, the slayer of his father. Blinded, how can Thor overcome Gnut and his horde?

A fearless barbarian warrior battles his way through the perils of his prehistoric world with one thought in mind - to avenge the brutal murder of his parents.

The Barbarians / The Norseman
$18.30 Super Savings
Add to Cart

19%off
The Champagne Murders
$16.20 Super Savings
Add to Cart