A teenager gets hooked on "uppers" in this drug morality tale. 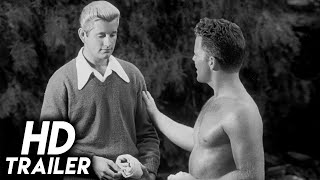 Newspaper headlines denounce a rash epidemic of barbiturate overdoses. Even more shocking is that the abusers are juveniles out for cheap kicks.

Responding to the rising public outrage, a prominent female judge sends young detective Sergeant Dave Kerrigan to uncover the source of the dangerous contraband. His dogged search leads to a crooked weight-loss "gym" where overweight women, desperate to shed pounds in a hurry, are supplied with addictive diet pills by the corrupt proprietors. The case gets more complicated when the gym owners conspire to have the judge's underage daughter photographed naked at a pool-side pill party. Facing blackmail, the girl's mother must choose between resigning from the bench to protect her daughter from public humiliation or turning up the heat on the drug pushers.

From the producer of "Glen or Glenda'" and starring Mr. America of 1948 (Eiferman), this schlocky exploitation film warns about the dangers of "bennies," "goofballs" and the sleeping pill racket."

Campy | Cult Film | Drugs | Vintage | Substance Abuse | Exploitation | Road To Ruin | Theatrical Release
This product is made-on-demand by the manufacturer using DVD-R recordable media. Almost all DVD players can play DVD-Rs (except for some older models made before 2000) - please consult your owner's manual for formats compatible with your player. These DVD-Rs may not play on all computers or DVD player/recorders. To address this, the manufacturer recommends viewing this product on a DVD player that does not have recording capability.

The Babysitters (Blu-ray)
$6
Add to Cart