A woman's love for a spiritual Chinese man is thwarted by her bigoted father in this silent masterpiece. 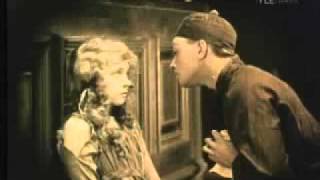 Lucy's miserable life is devoid of beauty, and she is constantly beaten by her father, an alcoholic boxer. In the same hopeless slum, a recent Chinese immigrant who runs an import shop helplessly watches the waif's struggle. When Lucy's father thrashes her within an inch of her life, the shopkeeper takes her in and nurses her back to health. As her condition improves, Lucy begins to show a new interest in life, thanks to all the beauty that her new friend has shown her. The young girl's father, outraged at her new relationship, is determined to separate the two forever, no matter what the consequences.

D.W. Griffith's most intimate and lyrical film, considered by some critics to be his masterpiece, Broken Blossoms was determined to be too grim by his studio and the director was forced to buy it back and release it himself. The film is also one of the absolute highlights of Lillian Gish's career. She is perfect as the wretched waif, so defeated she is unable to smile without using her fingers to turn up the corners of her mouth.

This strangely beautiful silent film from D.W. Griffith is also one of his more grim efforts; an indictment of child abuse and the violence of western society. An idealistic Asian (Richard Barthelemess) travels to the west in hopes of spreading the Buddha's message of peace to the round-eyed "sons of turmoil and strife." Instead he winds up a disillusioned, opium-smoking shopkeeper in London's squalid Limehouse District. Down the street, a poor waif (Lillian Gish) suffers horrific abuse at the hands of her boxer father (Donald Crisp). When fortune delivers the battered girl into the Asian's tender care, a strange and beautiful love blossoms between them, a love far too fragile to survive their brutal environment. Griffith directed with his unique blend of poetry and realism, and Miss Gish delivers a typically first-rate performance as the girl; the result is a work of art that's both eloquent and crushing. The film was originally presented with color tinting and a musical score composed by Griffith, both of which may vary in different video and film versions.

An early silent film (with a music track) which is quite effective in its almost barren simplicity. A poor Chinese man struggles to free the woman he loves. She is an abused girl living in the poor East End district of London and even when the Chinese man hides her by dressing her up in Asian costumes, his desire to help her proves useless in the face of her father's brutality.

Customer Rating:
Based on 13227 ratings.


before there was "Imitation of Life" there was Griffith's "Broken Blossoms." If I were to rate this by number of hankies you'll use, I would suggest that before you watch this movie, you invest in the kleenex Corp.