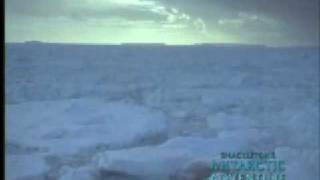 New York Times - 10/19/2001
"...[The story] is so gripping, so full of improbably turns and agonizing reversals that it bears repeating, and Mr. Butler and Ms. Alexander tell it straightforwardly and well..."
Chicago Sun-Times - 01/20/2002
"...[With] remarkable moving and still footage....The result is an astonishing adventure documentary..."
Entertainment Weekly - 11/02/2001
"...Astonishing pictures....The interviews with descendents of the ship's crew add color to frozen black-and-white images of real survivors..."

Narrated by Academy Award-nominated actor Liam Neeson (1993, Best Actor, Schindler's List), THE ENDURANCE is a faithful and dramatic documentary of the ill-fated expedition to Antarctica by Sir Ernest Shackleton from 1914-1916. Featuring interviews with family, on-location footage, archived audio interviews and letters from the expedition members, as well as still photography from the journey, THE ENDURANCE is a compelling and complete look into the men who boldly took on an impossible task, and tried to survive when all hope seemed lost. Newly remastered.

In August 1914, seasoned British explorer Sir Ernest Shackleton embarks on his third excursion into Antarctic territory, planning to cross the Antarctic continent on foot--something no other explorer has attempted before. Only a day's journey from his final destination, Shackleton's ship, The Endurance, is trapped in pack-ice, where she will remain frozen for the next ten months, all throughout the harsh Antarctic winter. With dwindling rations, blizzards, boredom, and illness to contend with, and only each other and their faithful sled dogs for company, the crew grows restless, and Shackleton has his hands full trying to keep the peace on board. A turning point occurs when ice floes finally threaten to crush the ship, and the men are forced to take to the lifeboats. Now Shackleton, abandoning any remaining notions of completing the mission, decides instead to bring back his crew alive at any cost, even though the nearest outpost of civilization is on an island 800 miles away. Historic film clips of The Endurance shot by expedition photographer Frank Hurley, new color footage of the eerily beautiful Antarctic landscape, as well as commentary by surviving family members and narration by Liam Neeson all combine to make watching this documentary a gripping experience.

20%off
Squanto: A Warrior's Tale
$12 Super Savings
Add to Cart

Encounters At the End of the World (Blu-ray)
$16.90 Super Savings
Add to Cart