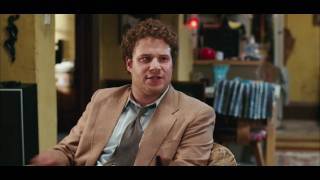 While it might sound outlandish to speak of THE PINEAPPLE EXPRESS in the same sentence as CITIZEN KANE, in its own little neck of the cinematic woods the Judd Apatow/Seth Rogen comedy is perhaps just as groundbreaking. In fact, it's nearly impossible to think of another film that blends so seamlessly pitch-perfect stoner babble with high-octane action sequences.

Dale Denton (Rogen), a process server with a weed fixation, witnesses a murder and turns to his dealer, Saul (James Franco), for support. The murderer is actually Saul's main drug supplier, and because of Saul's access to some extremely rare high-grade pot (called Pineapple Express) the two are quickly tracked down and put on the run. Like all Apatow/Rogen vehicles, the movie deals with the theme of men succumbing to adulthood and all the adjustments they are forced to make in the process. However, unlike KNOCKED UP and THE 40 YEAR OLD VIRGIN, PINEAPPLE EXPRESS is just too wacky to offer any lessons. Still, there's more going on here than giggles and the munchies. Indie director David Gordon Green (SNOW ANGELS) brings a subtle auteur's touch to the proceedings, approaching the smoking scenes with his distinctively loose feel and giving the action sequences a wonderfully dated sheen that makes them look more like a fight from KNIGHT RIDER than the empty flash of 21st-century blow-‘em-ups. It is Franco, however, who truly steals this movie--he hasn't been this charming since his days on FREAKS AND GEEKS. There's only so many ways to play a stoner, but Franco puts his own endearing, lovable spin on the type, portraying Saul as a kind-hearted, well-intentioned yet hardcore dope smoker. Rogen and Apatow have proven themselves a nearly unstoppable juggernaut; here's hoping they bring Franco along on the ride a little more often.

A new comedy from the creative genius of Judd Apatow (40 Year Old Virgin, Knocked Up, Talladega Nights) follows a pair of druggie losers as they reach the top of the hit-list when one witnesses a mob murder and drags his buddy into a crazy flight from mobsters bent on silencing both of them permanently. The film stars new sensation Seth Rogen (Knocked Up, Superbad, 40 Year Old Virgin) and James Franco (Spider-Man 1-3) and it co-stars Rosie Perez (Do The Right Thing) and Gary Cole (The Brady Bunch Movie). Movie is directed by David Gordon Green.