A female reporter is on the trail of a murderer and must outsmart him to avoid getting killed herself. 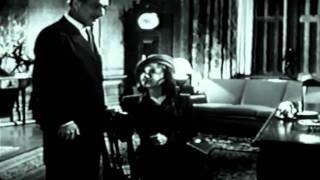 Old Quebec - an urban labyrinth of secrets and lies.

A routine assignment to interview a famous actress takes newspaper reporter Mary Roberts (Mary Anderson) down a nightmarish alley of corruption and death. The actress, who is dying in the hospital after a violent car accident, tells Mary that she was imprisoned in an insane asylum for claiming that her husband was murdered. When her editor abruptly cancels the story, Roberts becomes determined to uncover the truth.

Her investigation leads to distraught composer Michel (Helmut Dantine) and his lawyer, Frederic (Paul Lukas). Frederic, a patron of the arts, holds a strange power over Michel.

After the mysterious suicide of Michel's wife, Mary suspects that Frederic is not only insane but that he has also been extorting and killing many of the city's artists. Mary's attempt to expose the homicidal maniac puts her life in grave jeopardy as Frederic senses that she knows too much.

Filmed at authentic locations in Canada by Russian director Fedor Ozep, Whispering City is anchored by Anderson's performance as an innocent coming to grips with insanity and murder. Only the complex portrait by Paul Lukas tops her, as he portrays a man whose evil is hidden by an unfathomable mask of benevolence and kindness.

When a female reporter follows a murder trail to a wealthy art patron, she ends up in peril.

Mystery | Suspense | Thriller | Vintage | Murder
This product is made-on-demand by the manufacturer using DVD-R recordable media. Almost all DVD players can play DVD-Rs (except for some older models made before 2000) - please consult your owner's manual for formats compatible with your player. These DVD-Rs may not play on all computers or DVD player/recorders. To address this, the manufacturer recommends viewing this product on a DVD player that does not have recording capability.

23%off
Green Grow the Rushes
$6.90 Super Savings
Add to Cart