One Flew Over the Cuckoo's Nest R

If he's crazy, what does that make you? 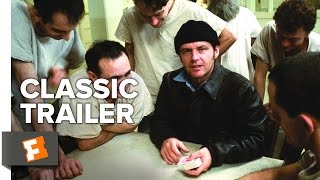 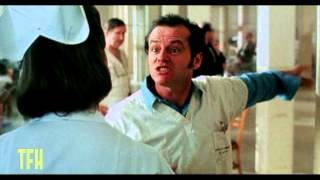 Adam Rifkin on ONE FLEW OVER THE CUCKOO'S NEST (Featurette)

Milos Foreman's ONE FLEW OVER THE CUCKOO'S NEST, based on the novel by Ken Kesey and the play by Dale Wasserman, presents a biting and ultimately tragic satire about mental institutions and the human spirit. A disturbing, witty, and electrifying drama, the film won the 1975 Academy Award for Best Picture. R.P. McMurphy (Jack Nicholson), a misbehaved con who shirks authority, finds himself in an asylum after faking insanity to get out of work detail in prison. The vivacious troublemaker soon finds himself in a worse kind of prison--one presided over by the repressed, terrifyingly quiet Nurse Ratched (Louise Fletcher), whose set of rules and regulations are meant to suppress patients' psychotic outbursts, and their spirits. It's not long before McMurphy is reaching out to his new inmates, trying desperately to bring life to an otherwise dead atmosphere. To Ratched, however, Nicholson's free spirit is as dangerous as a schizophrenic impulse. ONE FLEW OVER THE CUCKOO'S NEST is brilliantly acted by an ensemble that includes Brad Dourif, Christopher Lloyd, Vincent Schiavelli, and Danny DeVito.