Get email alerts for Dir En Grey
Available: Usually ships in 2-5 business days
LOW STOCK:
Only 3 copies left
Add to Cart
Add to Wishlist
Format:  CD
sku:  ZNL 0210
Related products:
Slipknot: We Are Not Your Kind for $18.10
Our customers love us! 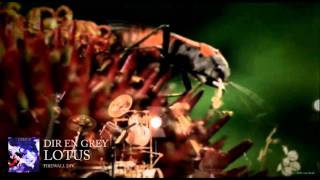 Personnel: Kyo (vocals); Die , Kaoru (guitar); Shinya (drums); Kaoru Takumi (programming).
Audio Mixer: Tue Madsen.
Recording information: Sound Crew Studio; Studio Innig; Studio KOLKHOZ; Studio Sunshine.
Photographer: Takao Ogata.
Translator: Jewels .
Dum Spiro Spero, the eighth full-length studio offering by Japan's Dir en Grey builds considerably on the musical frontiers established 2008's Uroboros. At this point in their career, it's simply inaccurate to call Dir en Grey a metal band, though they use plenty of it to get their unique, ambitious meld of styles across. While the pre-release singles "Different Sense" and "Lotus" offer somewhat accurate portraits of the sounds employed on Dum Spiro Spero, they're really only an aural sample of what's on offer. Likewise, the set's first two tracks are, in a sense, feints as well; with further clues to the album's totality but nowhere near a summation of its varied ambitions. The brief, melodically fragmented, piano-laden intro "Kyoukotsu Mo Nari" includes wordless vocals by Kyo, sparse guitar work by Kaoru and Die, and percussion by Shinya, while "The Blossoming Beelzebub" offers low-tuned distorted guitars and basslines, rolling tom-toms and snares, with Kyo singing -- not yet shrieking (that's later) -- in his highest falsetto, as the musical tension begins to build; it relents in a prog-laden interval only to return close to exploding without getting there. Dir en Grey's fury is unleashed on "Different Sense," complete with frightening growls, power riffs, and blastbeats. The back-to- back "Juuyoko" and "Shitataru Mourou" are complex sonic portraits of extreme music with gorgeous melodies, broken into pieces by furious riffing and hammering as basic death metal gives way to elongated passages of intricate lyric construction and multi-faceted harmonics. On the latter track, seamless transitions between squalling rock pyrotechnics and nearly transcendent lyricism occur on a dime. At the front of it all is Kyo, using his extended range as another instrument to showcase the band's staggering number of musical guises. Everything comes from and leads back to, his -- quite literally -- amazing voice (think Diamanda Galas as a young Japanese male). "Diabolos" is the album's longest track and its most theatrical; it's full of brooding melancholic, alt-rock atmospherics that build very gradually toward white-hot thrash metal and strip themselves back again. "Decayed Crow" is the closest thing to death metal here and Kyo wails like a more extreme version of Mike Patton. The acoustic guitars that introduce the power ballad "Vanitas" belie its sophisticated melody and lush use of dynamics, and underscore the album's brilliant production (handled by the band with a handful of engineers). That balladry is hinted at in the closer "Ruten No Tou," but is subverted -- and expanded upon -- by power metal and multi-textured pop. Dir en Grey are a band in their own genre at this point, and Dum Spiro Spero is the farthest-reaching testament to establish that as fact more than opinion. ~Thom Jurek