How I Live Now R

Love will lead you home 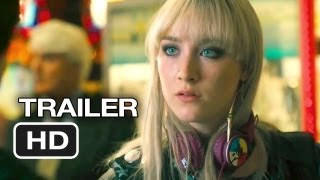 A New York teen visiting relatives in the English countryside must fight for survival after the entire world is plunged into war in this drama directed by Kevin Macdonald, and based on the apocalyptic novel by Meg Rosoff. Fifteen-year-old Daisy (Saoirse Ronan) has recently arrived in the United Kingdom to spend the summer with her cousins when her heart flutters at the sight of her handsome cousin Eddie (George MacKay). Just as the pair have begin to form an intense connection, however, the bombs begin to rain down on London, and an occupying military force seizes power. Now, with Eddie nowhere to be found, Daisy must protect his younger siblings Isaac (Tom Holland) and Piper (Harley Bird) while attempting to navigate a frightening new world where survival is a day-to-day struggle. Later, when the trio is separated, the uncertainty of not knowing Eddie's fate begins to take a heavy toll on the psyche of the frightened, misplaced Daisy.