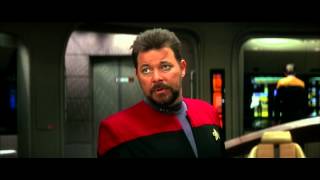 The first feature film starring the cast of "Star Trek: The Next Generation" finds Captain Picard and crew battling a sinister scientist whose plot is a century old. Picard's only hope lies in forging an alliance with a legendary Star Fleet captain from the past.

A new version of the starship Enterprise is launched with Captain James T. Kirk as the guest of honor, but no longer calling the shots. But, within moments of take-off, the Enterprise receives a distress signal from two ships about to be obliterated, and Captain Kirk is asked to return to the helm. With his vast experience and expertise, he manages to save one of the ships. However, Kirk disappears in the process, and at least one of the passengers he saves is not all thankful. It seems that the rescue yanked him out of an idyllic world of perfect joy. Now he'll do anything, even kill, to return -- and it's up to Captain Jean-Luc Picard to prevent that from happening.