The things that we fear the most have already happened to us...

288K ratings
Currently Out of Stock: We'll get more as soon as possible
Notify Me When Available
Add to Wishlist
Format:  Blu-ray
sku:  374JS
91% recommend us! 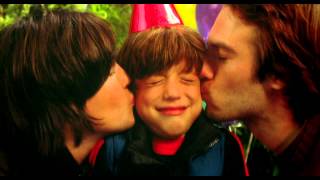 Viewed through our photographs, it would seem we have lived a joyous, leisurely existence. Sy Parrish (Robin Williams), who makes this observation, adversely leads a lonely life, operating a photo lab in a SavMart department store. He escapes his dreary reality through the family photos of Nancy Yorkin (Connie Nielsen) and her family. His admiration of the Yorkins becomes an obsession, as he fashions himself as Uncle Sy to little Jake (Dylan Smith). Sy's judgment becomes impaired by his unhealthy interest, causing him to lose his job of 11 years. As his final day approaches, Sy develops photographs revealing an indiscretion on the part of Mr. Yorkin (Michael Vartan). The unstable Sy now develops a disturbing, calculated plan to instill family values to the Yorkin clan.

Much of ONE HOUR PHOTO takes place inside a department store similar to a Wal-Mart, bordered in an icy blue. This cold atmosphere creates a solitary framework for the disturbed photo developer Sy Parrish, played with a melancholic detachment by Williams, working here against type. Director Mark Romanek (STATIC) has created a thriller with little violence. Instead, it is permeated with an uncomfortable fear emanating from its damaged protagonist.

16%off
The Black Belly of the Tarantula
$12.50 Super Savings
Add to Cart

The Hand That Rocks the Cradle
$6.50 Super Savings
Add to Cart