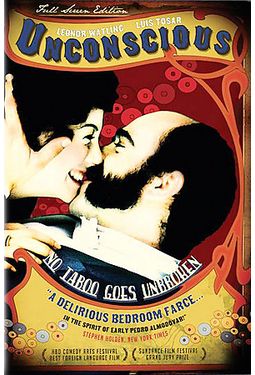 811 ratings
Currently Out of Stock: We'll get more as soon as possible
Notify Me When Available
Add to Wishlist
Format:  DVD
item number:  XTXB 05003D
Also released as:
Unconscious for $3.98
91% recommend us!

Joaquín Oristrell's UNCONSCIOUS is a a very funny romantic farce set in the supposedly austere psychiatric society of 1913 Barcelona. León Pardo (Alex Brendemühl) is a psychiatrist who suddenly disappears, telling his devoted pregnant wife, Alma (Leonor Watling), not to look for him. Worried for her husband's life, Alma enlists the help of her very serious brother-in-law, Salvador (Luis Tosar), another psychiatrist, to discover what is going on and to find León. Meanwhile, Alma's father, Dr. Mira (Juanjo Puigcorbé), one of the leading psychiatrists in Barcelona, is awaiting the arrival of Sigmund Freud, who is scheduled to speak at a special conference. Despite Salvador's protestations, Alma--whose sister, Olivia (Núria Prims), is married to Salvador--leads him on a dangerous adventure filled with sex, lies, violence, deception, and Marxist philosophy.

Alma and Salvador make a fabulous team, part Nick and Nora Charles, part Sherlock Holmes and Watson; Watling, a veteran of several Pedro Almodóvar films, is particularly engaging in the lead role, and Tosar as Salvador--with his hysterical facial hair--is a hoot the whole way through. Mercedes Sampietro adds to the humor as the Pardos's villainous housekeeper. Oristrell balances the seriousness with the farfetched in this old-fashioned romp, cowritten with Teresa de Pelegrí and Dominic Harari, the couple who directed and penned the nonstop comedy ONLY HUMAN. The period piece is enhanced by frames that kick off each new chapter, as well as by the great soundtrack by Sergio Moure.

The Seven-Per-Cent Solution
$19
Add to Cart

The Fabulous World of Jules Verne (DVD)
$10
Add to Cart