They're about to get more than they plea-bargained for. 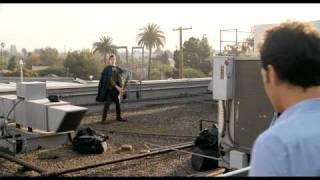 Variety - 10/19/2008
"[ROLE MODELS] amuses throughout. That's in large part due to the stars, whose roles very much play to their familiar comic strengths..."
USA Today - 11/07/2008
3 stars out of 4 -- "Misfits and misanthropes are the heroes of ROLE MODELS, a surprisingly clever comedy....It is consistently funny, largely because of the sharp dialogue..."
Los Angeles Times - 11/07/2008
"ROLE MODELS wouldn't be anything without Mintz-Plasse....[His] camera presence is at once unfailingly modest and distinctive."
Chicago Sun-Times - 11/05/2008
"ROLE MODELS is the kind of movie you don't see every day, a comedy that is funny....There are nicely drawn supporting characters..."
Entertainment Weekly - 11/14/2008
"The fun of ROLE MODELS is that it's a high-concept movie executed with speed and finesse and the kind of brusquely tossed-off scene banter that can get you laughing before you know what hit you." -- Grade: B+
Rolling Stone - 11/13/2008
3 stars out of 4 -- "It's killer funny. Cheers to Paul Rudd...who takes just the right wry comic tone as Danny....Ripe, rowdy fun."
Total Film - 01/01/2009
4 stars out of 5 -- "The cast is good enough to make it all seem like snarky improv, especially Paul Rudd....ROLE MODELS is positively grinchy -- and all the funnier for it."
Empire - 02/01/2009
4 stars out of 5 -- "[I]t transcends its high concept through strong performances, filthy-smart patter, a winning affection for all its core characters and ability to hit its emotional targets without descending into slush."
Hollywood Reporter - 10/19/2008
"[I]t's a self-improvement comedy that hits every beat on time....Rudd and Scott hail from different universes of movie comedy, but manage together here just fine..."

Director David Wain (WET HOT AMERICAN SUMMER) capably mixes the saucy and the sentimental in the bawdy boys-to-men comedy ROLE MODELS. Stuck-in-a-rut Danny Donahue (Paul Rudd) and womanizing man-child Wheeler (Seann William Scott) work together promoting Minotaur energy drink to high school students. But when Danny's girlfriend Beth (Elizabeth Banks) dumps him because he lacks maturity, his lashing out threatens to land him and Wheeler in jail. Their only way out is to act as mentors at Sturdy Wings, a Big Brother-esque organization run by reformed addict--and unrepentant flirt--Gayle Sweeny (Jane Lynch). There, Danny is paired with the decidedly dorky Augie (Christopher Mintz-Plasse) while Wheeler is the latest victim to take on foul-mouthed Ronnie (Bobb'e J. Thompson). After a bumpy beginning, both Danny and Wheeler connect with their kids over everything from sword-and-sorcery role playing to the chick-scoring power of the band Kiss. But when these two presumptive adults put their charges' well-being in jeopardy, they face both jail time and the loss of everyone's respect. With their own friendship on the brink of ruin, Danny and Wheeler--not to mention a little help from the magic of Kiss--must reach deep inside to prove to the world how responsible they can truly be. In the spirit of films like KNOCKED UP and THE 40-YEAR OLD VIRGIN, ROLE MODELS features a healthy dose of sharp humor and juvenile gags balanced by a feel-good message that growing up doesn't mean giving up what makes each of us special.