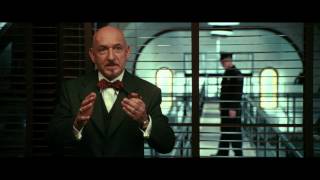 Martin Scorsese and Leonardo DiCaprio team up for a fourth time for this adaptation of SHUTTER ISLAND, a novel by Dennis LeHane (MYSTIC RIVER). The film opens in 1954 as World War II veteran and current federal marshal Teddy Daniels (Leonardo DiCaprio) and his new partner, Chuck (Mark Ruffalo), ferry to Shutter Island, a water-bound mental hospital housing the criminally insane. They have been asked to investigate the disappearance of Rachel Solando (Emily Mortimer), a patient admitted to the asylum after she murdered her three children. As Teddy quizzes Dr. Cawley (Ben Kingsley), the head of the institution, he begins to suspect that the authorities in charge might not be giving him the whole truth, and that a terrible fate may befall all the patients in spooky Ward C -- a unit devoted to the most heinous of the hospital's inmates. Complicating matters further, Teddy has a secret of his own -- the arsonist who murdered his wife is incarcerated on Shutter Island. Driven to confront his wife's killer, and stranded on the island because of a hurricane, Teddy must unravel the secrets of the eerie place before succumbing to his own madness. Max von Sydow, Emily Mortimer, Michelle Williams, Patricia Clarkson, and Jackie Earle Haley round out the supporting cast.

The Wolf of Wall Street
$6.50 Super Savings
Add to Cart

The Girl with the Dragon Tattoo (Blu-ray)
$9.80 Super Savings
Add to Cart