Women ARE The Law! 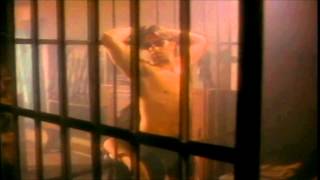 When a low-rent space traveler lands on "Petticoat Planet," he discovers a world populated with frisky women...all right! Commander Steve Rogers adds a welcome dash of testosterone to this realm of sex-starved cowgirls who guzzle hooch, shoot six-guns, and wear as small a loincloth as local conventions permit. Interesting Trivia: Petticoat Planet was shot on the same set as two other Full Moon movies: Oblivion and Backlash: Oblivion 2

Commander Steve Rogers, a blue-collar space jockey with a lousy job, crash-lands his corroding craft onto a desert planet. But his luck is about to change... As he recovers, he finds himself to be the only man in a wild western town inhabited by beautiful, gun slingin', whiskey drinkin' women. Peace, harmony and boredom abound in Puckerbush Gulch until word gets out that for the first time in twenty years, there's a man in their midst. Best friends become bitter foes as the sex-crazed cowgirls corral the Commander one by one. Lost in space with no way home, can our hero find true happiness, or will he be pushin' up daisies from pure exhaustion?