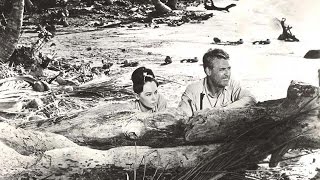 This World War II comedy stars Cary Grant in an uncharacteristic turn as Walter Eckland. Walter is an unshaven bum who inhabits a deserted island in the South Seas. Completely boozed up, unshaven, and badly dressed, Walter is a watcher for Japanese spy planes. An Australian Navy Commander, Frank Houghton (Trevor Howard) has pressed Walter, who once had his own cruiser at the beginning of the war, to become the sole occupant of a strategic watching station. It is into this world that smart and sexy Catherine Frenau (Leslie Caron) is drawn when Walter, en route in a dinghy to rescue another watcher, stumbles on to the schoolteacher and a flock of seven young girls. The girls have been marooned because their pilot was ordered to leave them to rescue the survivors of an abandoned bomber. Ralph Nelson directs shrewdly and keeps the comedy crisp as these eight survivors try to inhabit the same small island without driving each other crazy. The sharp witted Academy Award winning screenplay by Peter Stone and Frank Tarloff, is based on a story by S.H. Barnett.

That Touch of Mink
$17.20 Super Savings
Add to Cart

The Grass Is Greener
$17.20 Super Savings
Add to Cart