Once Upon a Time in Venice (Blu-ray + DVD)

Never mess with a man's dog

Available: Usually ships in 1-3 business days
LOW STOCK:
Only 2 copies left
Add to Cart
Add to Wishlist
Format:  DVD  (2 Discs)
sku:  6FFGX
Different formats available:
Once Upon a Time in Venice (DVD) for $17.20
Also released as:
Once Upon a Time (Blu-ray) for $22.20
Our customers love us! 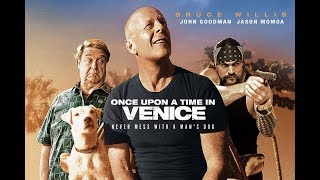 RogerEbert.com - 06/16/2017
"The film mostly consists of two-hander scenes where Willis gets to crack wise with various character actors, and generally be a likable screen presence. It's genuinely nice to see him work in that mode."
Chicago Sun-Times - 06/15/2017
"[A] cheerfully depraved guilty pleasure in which Willis and a host of other recognizable faces meander about, cracking off a few good lines here and there while the soundtrack blasts mood-setting tunes..."

When his beloved dog Buddy is taken by a gang of notorious criminals, Los Angeles PI Steve Ford (Bruce Willis) faces one tough situation after another as he tries to get his faithful canine back. In time, Ford finds himself doing the gang's bidding as he is chased by a loan shark, a pair of ruthless Samoan brothers, and other shady characters. Jason Momoa, Kal Penn, and John Goodman co-star in this action comedy, which was written and directed by Mark and Robb Cullen.