Honor Was Their Code. 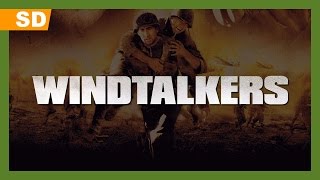 WINDTALKERS begins quietly--with widescreen aerial shots of clouds that gradually clear to reveal the beautiful mesas of Monument Valley. A bus collects Navajo volunteers Ben Yahzee (Adam Beach) and Charlie Whitehorse (Roger Willie). It's 1943, and the U.S. has developed an indecipherable secret military code based on the Navajo language. Yahzee and Whitehorse are to be trained as code talkers.

Then John Woo's Pacific war film erupts into violence, with a savage battle that has one survivor, Joe Enders (Nicolas Cage). Badly wounded and feeling guilty at the loss of his companions, Joe recuperates in Hawaii where he is helped by a sympathetic nurse (Frances O'Connor). Joe disguises his hearing loss and he is promoted as Yahzee's battlefield bodyguard. Ordered to "protect the code at all times," Joe must prevent Yahzee from being captured. At first, Yahzee and Whitehorse, whose bodyguard is Ox Henderson (Christian Slater), are subjected to prejudice--particularly from Rogers (Noah Emmerich). But when the unit is shipped to Saipan, the Marines begin to appreciate the code talkers.

Director Woo has created a powerful drama. The visceral battle sequences are strikingly filmed and there is fine acting from Cage, Beach, Willie, Slater, Emmerich, and Frances O'Connor, who portrays the poignancy of love in uncertain times.

Flags of Our Fathers
$8.70 Super Savings
Add to Cart