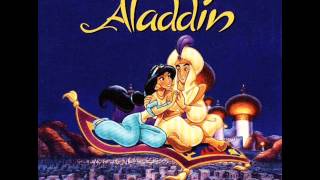 Original score by Alan Menken.
Digitally remastered by Bruce Botnick & Josh Gabriel.
"A Whole New World (Aladdin's Theme)," performed by Peabo Bryson & Regina Belle, won 1994 Grammy Awards for Record Of The Year, for Pop Duo Or Group With Vocal and for Song For A Motion Picture Of Television. It was nominated for Song Of The Year.
ALADDIN won the 1994 Grammy Award for Musical Album For Children and for Instrumental Composition for a Motion Picture or Television Production.
Includes two bonus tracks.
Composer: Alan Menken.
Personnel: Alan Menken (vocals); Howard Ashman, Jonathan Freeman, Lea Salonga, Bruce Adler, Brad Kane (vocals).
Audio Mixers: Bruce Botnick; Dana Jon Chappelle.
Arrangers: Alan Menken; Daniel Troob; Robbie Buchanan.
The soundtrack to Disney's Aladdin features another first-rate score by composer Alan Menken and lyricists Howard Ashman and Tim Rice, who helped Menken complete the score when Ashman died before it was finished. The film's hit single "A Whole New World" and Robin Williams' bravura performance as the magic lamp on songs such as "Friend Like Me" and "Prince Ali" are justifiably credited as the album's highlights. Aladdin's score is consistently good, rivaling the best of Disney's other animated musicals from the '90s. The manic "One Jump" and "Arabian Nights" (which was later re-recorded to remove lyrics potentially offensive to Arabs) are cut from the cloth of classic Broadway show tunes, while Menken's instrumental cues range from the sweetly cartoonish "To Be Free" to the romantic "Kiss" to the ominous "Jafar's Hour" and "On a Dark Night." While it's not quite as brilliant as the music from The Little Mermaid or Beauty & the Beast, Aladdin is still a fine soundtrack and an auspicious debut for Menken and Rice's collaboration. ~ Heather Phares

Best of the Lion King
$6.10 Super Savings
Add to Cart

Soundtrack
Beauty and the Beast (CD)
$7.30
Add to Cart

78%off
Arctic Tale: Music From and Inspired By the Motion Picture (CD)
$3.98 on Sale
Add to Cart