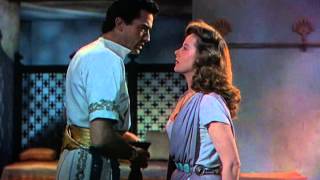 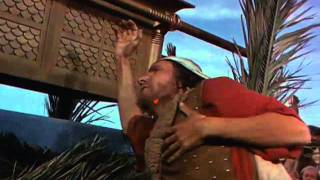 Once In 3000 Years Featurette with Gregory Peck & Susan Hayward

For This Woman...He Broke God's Own Commandment!

A Biblical tale of love, tragedy, loss and redemption.

Gregory Peck stars in this gripping retelling of the beloved Old Testament story. Although he has killed Goliath and prevailed in countless battles, there is one force that Israel's King David (Peck) cannot vanquish: love. Smitten with the beautiful Bathsheba (Susan Hayward), David sends her soldier husband, Uriah (Kieron Moore), into a hopeless battle, setting into motion his own downward spiral.

Neglecting kingdom and faith, David incurs the wrath of God, the destruction of his country and the ill will of his people, who expect Bathsheba to pay the ultimate price for adultery. Gorgeously filmed, rapturously acted and deeply moving, David And Bathsheba's tale of romantic obsession is as beautiful as it is timeless.

DAVID AND BATHSHEBA brings to life what is possibly the most dramatic story in the Old Testament. Gregory Peck stars as King David, a devout servant of God who is having serious marital difficulties with his wife Michal. Recently returned home from the wars with the Ark of the Covenant in tow, David spies hottie Bathsheba (Susan Hayward) bathing on a nearby rooftop, and in no time at all the two lovebirds are tossing their togas to consume their passion. Of course, there are a couple small hitches--Bathsheba's husband for one, and the wrath of God. With a drought upon the land and King David's flock demanding that Bathsheba be stoned to death for her sins, dashing David must come up with some new psalms on the double to save the kingdom and his love. Special effects work on the Ark was innovative for the period and the costuming is excellent, making DAVID AND BATHSHEBA one of the better biblical films of the 1950s.

King David's infatuation with Bathsheba, the wife of one of his soldiers, nearly causes the destruction of his kingdom when he brings the wrath of God upon his land.

16%off
The Agony and the Ecstasy
$8.40 Super Savings
Add to Cart

20%off
King of Kings
$12 Super Savings
Add to Cart