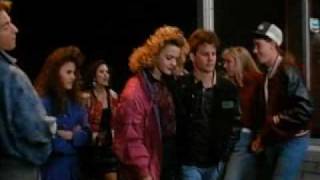 Allison Anders's GAS FOOD LODGING is a heartfelt, honest look at a teenage girl's coming of age. Fairuza Balk stars, giving a tremendously sympathetic performance as Shade, a girl living in a trailer park with her mom, Nora (Brooke Adams), and doing her best to hold her volatile family together. While Shade's older sister, Trudi (Ione Skye), sleeps around and is filled with rage at men, her mother, and the world in general, Shade is a compassionate, melancholy teen who spends time watching wildly romantic Mexican movies at the local cinema. She believes her mother will be happy if she can find her father, John Evans (a moving performance by James Brolin), and reunite her family. Though things don't go quite so smoothly, the film maintains a hopeful tone. Anders's second film, GAS FOOD LODGING put her on the indie film map, establishing her as sensitive director whose stories of struggling women, told in their own voices, are marked by emotional honesty and disarming humor. GAS FOOD LODGING is an intimate, well-wrought gem.

In GAS FOOD LODGING, a mother and her two daughters try to live a normal life in their whistle stop desert town in New Mexico. Brooke Adams stars as Nora, whose two diametrically opposed daughters, Shade (Fairuza Balk), and Trudi (Ione Skye) attempt to come to terms with their places in the world. Shade's escape is through the melodramas at the local Mexican cinema; Trudi throws herself into sexual relationships with men. The film examines the women's lives, relationships with each other, and their lovers, in a down-to-earth, empathetic style. GAS FOOD LODGING put director Allison Anders on the indie film map.

Sexual Chronicles of a French Family
$23.50
Add to Cart