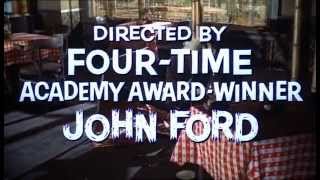 The hilarious DONOVAN'S REEF, one of John Ford's rare but memorable forays into comedy, is set on the South Sea island of Haleakoloha, where two navy buddies have decided to stay after World War II. Michael "Guns" Donovan (John Wayne) and Aloysius "Boats" Gilhooley (Lee Marvin), who like to celebrate their mutual birthday every year by trying to beat the hell out of each other, are enacting the ritual in Guns's bar, Donovan's Reef. Dr. William Dedham (Jack Warden), scion of a wealthy family and another societal dropout, breaks up the fight after an appropriate amount of damage has been done. He soon learns that his very proper daughter, Amelia (Elizabeth Allen), is about to arrive from Boston, unaware that he's had three children by a Polynesian princess. Dedham persuades Guns to pretend to be the father of his kids during the visit in order to be spared Amelia's wrath. While Dedham's daughter is initially put off by the juvenile antics of Donovan's crew, the tavern owner's feelings toward her are far more positive. After she beats him in a swimming competition, she begins to see his appeal. Filmed in Kauai, Hawaii, this entertaining family-oriented comedy is stoked with broad physical gags and the inspired tomfoolery of the cast. The most notable performance belongs to Wayne, who ends his long, hugely successful, and artistically triumphant collaboration with Ford on a high and suitably revelatory note, their last film together a roisterous, laugh-filled party.

A snooty Boston girl arrives on a tiny South Pacific isle in search of her missing father and encounters two old salty dogs.