There were three men in her life. One to take her... one to love her... and one to kill her. 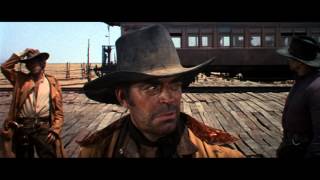 Once Upon A Time In The West - Trailer 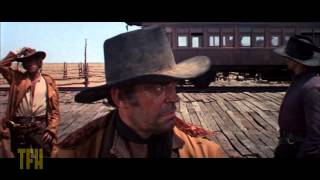 John Landis on ONCE UPON A TIME IN THE WEST (Featurette)

Morton (Gabriele Ferzetti), the power-hungry owner of a railroad company, hires Frank (Henry Fonda, playing against type), a gunfighter without a conscience, to kill anyone who stands in the way of the completion of the railroad. After Frank murders land owner Brett McBain (Frank Wolff), McBain's widow (Claudia Cardinale) hires two killers of her own to protect her and gain revenge: a mysterious, harmonica-playing desperado (Charles Bronson) and his rogue sidekick (Jason Robards). Using techniques previously unseen in the genre, Sergio Leone utilizes close-ups, color, and Ennio Morricone's trademark score to create a tense and somber meditation on death which is widely considered to be one of the best westerns in cinematic history. Soon-to-be legendary Italian directors Dario Argento (SUSPIRIA) and Bernardo Bertolucci (THE LAST EMPEROR) collaborated with Leone on the screenplay.

Sergio Leone's epic homage to the Hollywood western has become a cinematic classic. Leone plays with the genre's conventions primarily through evocative camerawork and music, and with a minimum of dialogue.
The film follows several stories, all centering on greed, murder and revenge. In one, gunmen slaughter an entire family who are awaiting the arrival of their father's new bride. The wife valiantly attempts to hold on to the land she has inherited. But the cold-blooded outlaws who committed the massacre want to complete the job by killing her.
There's also a mysterious "Nameless Man" who has his own reasons for hunting down these bandits... and he has murder on his mind.

A Fistful of Dollars
$10
Add to Cart

A Fistful of Dollars
$19
Add to Cart