The sailor man with the spinach can! 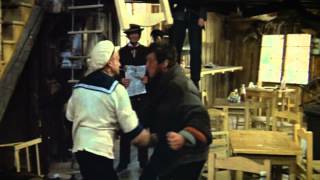 The classic comic strip and cartoon hero comes to life in Robert Altman's film adaptation of the adventures of the spinach-munching sailor. After he's thrown from his ship during a storm, Popeye (Robin Williams) finds refuge in a quaint seaside town. There he rents a room from the Oyls and meets their daughter Olive (the perfectly cast Shelley Duvall). Olive is engaged to Captain Bluto (Paul Smith), a bully and ruffian who is in charge of collecting taxes for the mysterious Commandant. Popeye, who was orphaned at an early age, is in the midst of a desperate search for his missing father, but what he doesn't realize is that the shipwreck has brought him unexpectedly close to his final destination. In bringing his own distinct vision to E. C. Segar's legendary hero, Altman creates an atmosphere that is breezy, loose, and filled with slapstick shenanigans. Williams portrays Popeye with a physically comic flair that is both honest and energetic--as do the rest of the cast members, including frequent Altman contributors Duvall, Paul Dooley, and David Arkin. Harry Nilsson's songs add to the lighthearted affair, making POPEYE an enjoyable family viewing experience all around.

Robin Williams performs his signature physical comedy in the title role of this musical-fantasy based on E. C. Segar's comic-strip hero, which finds the spinach-eating sailor searching for his missing father, meeting Olive Oyl, and coping with the bully Bluto. The burger-happy Wimpy is also featured in the colorful cast of characters.

The Muppet Movie
$10
Add to Cart

Customer Rating:
Based on 85314 ratings.