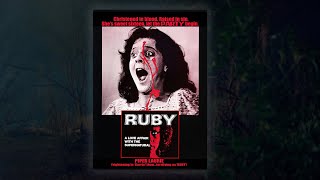 "Ruby" is a horror film with the emphasis on atmosphere and suspense, but it also contains enough creepy special effects and blood and gore to satisfy the most demanding genre fans. Most of it takes place at night, with all kinds of marvelous influences lurking in the shadows. Directed by cult-film director Curtis Harrington (Night Tide, Queen of Blood, Voyage to the Prehistoric Planet, Games, What's the Matter with Helen? Whoever Slew Auntie Roo? The Killing Kind) and featuring an impressive cast including Piper Laurie, fresh from her starring role in Carrie, 1976, as Ruby, and Stuart Whitman (Those Magnificent Men in Their Flying Machines, 1965). The movie begins in 1935, Ruby Clair, beautiful hostess of a Florida gambling house, watches in horror as her gangster boyfriend is gunned down, his bullet-riddled body sinking slowly into a dark, foggy bayou. That same night Ruby's baby is born. Fast forward to 1951. Ruby now owns a drive-in movie operated by a crew of ex-convicts she has befriended. Her beautiful daughter has never uttered a sound since she was born. One by one her theater employees are savagely murdered. Could it be the work of a rival criminal settling an old score? Or could it be an evil wreaking vengeance from beyond the grave? A psychologist from the state prison tries to find out - and what he discovers is not for the squeamish. This special BD/DVD combo is the definitive original theatrical version of Ruby, with a 2K restoration, 2 commentary tracks and over 2 hours of video interviews and special features!