Things fall down. People look up. And when it rains, it pours. 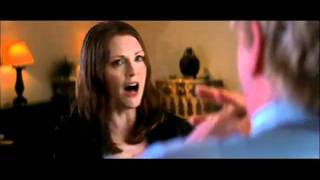 "...And it is in the humble opinion of this narrator that this is not just, 'something that happened.' This cannot be, 'one of those things.' This, please, cannot be that. And for what I would like to say, I can't. This was not just a matter of chance. These strange things happen all the time."
- Opening narration by actor Ricky Jay, after the strange death of Sydney Barringer
"In this life, it's not what you hope for, it's not what you deserve--it's what you take."
- Frank T.J. Mackey (Tom Cruise)
"You wanna kiss me, Jim'"--Claudia Wilson Gator (Melora Walters)
"Yes, I do."
- Jim Kurring (John C. Reilly)
"Now that I've met you, would you object to never seeing me again'"
- Claudia to Jim
"I know this sounds silly, and I know that I might sound ridiculous, like this is the scene in the movie where the guy's trying to get a hold of the long-lost son, you know, but this is that scene. This is that scene, and I think they have those scenes in movies because they're true, you know, because they really happen. And you've got to believe me, this is really happening."
- Phil Parma (Philip Seymour Hoffman) on the phone looking for Frank
"As the book says, we may be through with the past, but the past ain't though with us."
- Ending narration by Ricky Jay (echoed throughtout the film)

In a single day in Los Angeles, a number of interconnected lives are changed forever. A lonely police officer (John C. Reilly) falls in love with a disturbed cocaine addict (Melora Walters). Her father (Philip Baker Hall), the host of the game show "What Do Kids Know'" has terminal cancer and tries to make amends for his past mistakes. A former champion of the show (William H. Macy) struggles to find love while the current champion (Jeremy Blackman) suffocates under the pressures of being a boy genius. An elderly man (Jason Robards) lies on his deathbed, tended by nurse Phil Parma (Philip Seymour Hoffman), while his trophy wife (Julianne Moore) wrestles with grief and guilt, and his estranged son (Tom Cruise), an infomercial host, teaches workshops on how to trick women into having sex. Throughout all of this, past deeds are lamented and strange forces loom in the air.

Director Paul Thomas Anderson's follow-up to BOOGIE NIGHTS is an extravagant, emotional epic inspired by such films as Robert Altman's NASHVILLE and SHORT CUTS, with a sprawling cast of characters searching for love and meaning in a chaotic world. The cast delivers uniformly excellent performances, most notably Tom Cruise's Oscar-nominated role as the sleazy Frank T.J. Mackey.