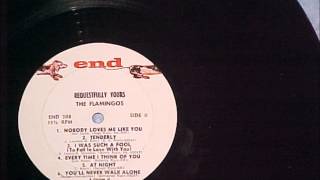 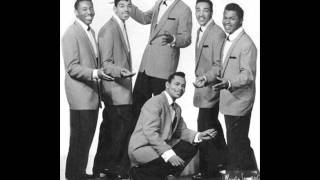 The Flamingos Yours (Music Video)

The five-member vocal group The Flamingos rose to fame in the early '50s. Known for their covers of standards and classics, this disc features their smooth vocal stylings that have never gone out of style.

Also available on 1 CD with THE SOUND OF THE FLAMINGOS.
The Flamingos: Jacob Carey, Ezekiel Carey, Paul Wilson, John Carter, Sollie McElroy.
Personnel: Terry Johnson (guitar); Nate Nelson (drums).
Liner Note Author: Ira Howard.
Unknown Contributor Roles: The Flamingos ; Tommy Hunt.
Along with a wealth of other doo wop groups that emerged during the early '50s, the Flamingos used their considerable gospel vocal chops to strike pop gold. While maybe not as successful as, say, the Platters were, the Flamingos still had an equal share of talent, as their late-'50s and early-'60s records on the End label attest. In addition to a huge hit cover of "I Only Have Eyes for You," the Flamingos also cut solid long-players like Requestfully Yours during this time. Featuring the group's second smash, a version of Sam Cooke's "Nobody Loves Me Like You," the album also includes stunning renditions of "In the Still of the Night," "When I Fall in Love," and "Tenderly." Rounding out the set, there are the fine crooners cut "Beside You" and singer Tommy Johnson's impressionistic "You, Me and the Sea." Complimenting their tasty harmony work, Johnson and his cohorts (Zeke Carey, Tommy Hunt, and Nate Nelson) all take lead vocal turns and provide some of the instrumental backing as well. Containing a seamless mix of doo wop, big-band pop, and innovative harmonies that would prefigure soul vocal outfits like the Delphonics, these 12 sides make for a fine introduction to the Flamingos' prime recordings. ~ Stephen Cook

Customer Rating:
Based on 5 ratings.


THE FLAMINGOS RANKS AMONG MY TOP 5 OF MY FAVORITE DOOWOP GROUPS OF ALL TIME! THIS ALBUM,IN MY OPINION, IS THE GROUPS BEST! RELEASED IN 1960, EVERY TRACK IS GORGEOUS WITH THEIR 3 LEAD SINGERS-NATE NELSON,TOMMY HUNT AND TERRY JOHNSON! PRODUCTION WISE-THIS CD IS JUST TOO BEAUTIFUL FOR WORDS! A CLASSY CD FROM A CLASSY GROUP!