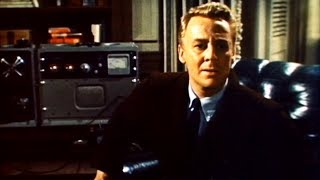 When a blind man overhears a kidnapping plot, the only thing more difficult than foiling it is getting someone to believe him. Without the help of friends or the authorities, the man, along with his fiance, pieces together the clues of the mystery, all of which are sound.

Van Johnson portrays a blind American writer living in London. Blessed with an acute hearing sense, Johnson overhears a kidnapping plot but neither his friends nor the authorities believe him, chalking up his story as the product of a writer's imagination. Disgruntled, Johnson vows to scuttle the kidnapping himself -- with the assistant of his fiancée Vera Miles. Despite his handicap, Johnson puts the pieces together using sounds as evidence and guidance. Ultimately Johnson finds his life in danger when he corners the criminal in a dark alley. 23 PACES TO BAKER STREET was one of several ''50s 20th Century-Fox films shot on location in London to take advantage of Fox's "frozen funds" -- money earned by the studio in England which by law could only be spent in that country.

Action | Adventure | Mystery | Teenage | Thriller | Crime | Kidnapping | Teenagers | Poets | Criminals
This product is made-on-demand by the manufacturer using DVD-R recordable media. Almost all DVD players can play DVD-Rs (except for some older models made before 2000) - please consult your owner's manual for formats compatible with your player. These DVD-Rs may not play on all computers or DVD player/recorders. To address this, the manufacturer recommends viewing this product on a DVD player that does not have recording capability.

18%off
The Spiral Staircase
$16.40 Super Savings
Add to Cart

Hot
American Guerrilla in the Philippines (DVD-R)
$19.99 on Sale
Add to Cart