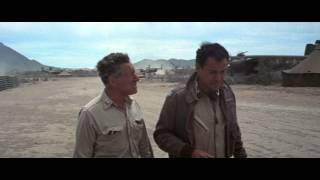 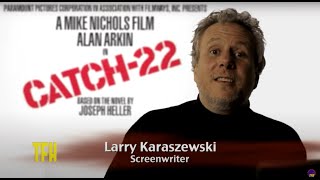 Based on Joseph Heller's critically acclaimed, best-selling novel, CATCH-22 is Mike Nichols's provocative antiwar satire that tells the frenetic tale of a group of World War II fliers trapped in the insanity of the Mediterranean. The "catch-22" of the title deals with a military snafu that results when Yossarian (Alan Arkin), a bombardier in the war, attempts to get out of the military by feigning insanity. Yet the simple fact that he is able to acknowledge his own mortality automatically renders him sane. Frustrated into submission, the frazzled Yossarian must return to the frontlines to watch his friends and compatriots die off one by one.

After the success of WHO'S AFRAID OF VIRGINIA WOOLF' and THE GRADUATE, Nichols bravely attempted to translate Heller's beloved novel to the big screen. As the terrified Yossarian, Arkin is his typically brilliant self. The rest of the all-star cast--which includes heavy-hitters Orson Welles, Jon Voight, Martin Sheen, Bob Newhart, and Anthony Perkins--further bring Heller's scathing vision to life. While the breakout success of Robert Altman's M*A*S*H and Nichols's experimental approach to the material might have attributed to the film's lackluster box office response, CATCH-22 remains a strikingly relevant condemnation of war.

This film adaptation of Joseph Heller's best-selling novel tells the story of a very eccentric air force troop stationed in the Mediterranean during WWII. Centering on the highly neurotic and paranoid Captain Yossarian, the black comedy captures the paradoxes and surrealism that pervade military life.

Dr. Strangelove Or: How I Learned to Stop Worrying and Love...
$12.60 Super Savings
Add to Cart

Dr. Strangelove or: How I Learned to Stop Worrying and Love...
$26.10 Super Savings
Add to Cart

Dr. Strangelove or: How I Learned to Stop Worrying and Love...
$34.50 Super Savings
Add to Cart