Sky Captain and the World of Tomorrow PG

Who will save us? 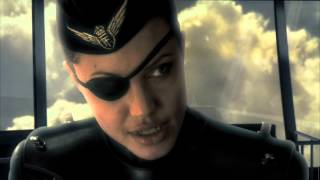 Sky Captain and The World of Tomorrow - Trailer

In writer-director Kerry Conran's debut film, ace pilot Joe "Sky Captain" Sullivan (Jude Law) reluctantly teams up with his former flame, journalist Polly Perkins (Gwyneth Paltrow), to uncover the mystery behind a group of missing scientists and a series of shocking robot attacks. Aided by gadgetry whiz Dex Dearborn (Giovanni Ribisi) and enigmatic military commander Franky Cook (Angelina Jolie), Joe and Polly must find out who is responsible for an increasingly elaborate scheme that may trigger the end of the world.

A highly stylized, mostly computer-generated spectacle, SKY CAPTAIN AND THE WORLD OF TOMORROW is a striking cinematic achievement. Steeped in the marvelous visuals of 1930s pop culture, Conran's movie is a loving tribute to that era, featuring clever nods to FLASH GORDON, BUCK ROGERS, and other adventure serials of the time. Beginning in a gloriously slate-gray, towering New York City, this movie follows its heroes from one intriguing locale to the next. Although the remarkable images of the film threaten to eclipse the characters at times, SKY CAPTAIN is very well cast, with the actors pitch-perfect for their respective roles, particularly the luminous Paltrow and the brainy Ribisi. And yet the stunning retro-futuristic design is always at the fore, making for a wonderfully unique movie.