The Man Who Cheated Himself 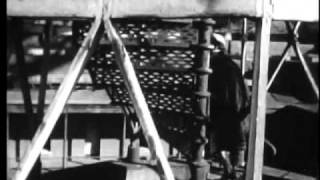 Police Detective Ed Cullen is running hot and heavy with his clandestine lover, socialite Lois Frazer. Their passion is interrupted when her estranged husband enters the house through a balcony door and Lois "accidentally" shoots him twice at close range. Unwilling to put their affair on hold, Ed begins to orchestrate an elaborate cover-up. Dumping the body at the airport, Cullen's car is observed leaving the scene, but when the witnesses cannot identify him, it looks like the murderous couple are in the clear. However, his kid-brother Andy, recently promoted to detective, smells a rat and refuses to let the case stay closed - although he has no idea how close to home and to what tragic consequences his suspicions will lead.

Director Felix Feist delivers a fast-paced and under-appreciated film noir gem in The Man Who Cheated Himself. Lee J. Cobb created the iconic roles of Willy Loman in Arthur Miller's Death Of A Salesman (1949), and Johnny Friendly, mob boss in the 1954 Academy Award- winning classic, On The Waterfront. Jane Wyatt gained fame playing Ronald Coleman's paramour in the 1937 masterpiece, Lost Horizon but is best known today for her role as Margaret Anderson, the mother on the 1950s TV series, "Father Knows Best," for which she won three Emmys.

Mystery | Suspense | Thriller | Killer | Film Noir | Detective
This product is made-on-demand by the manufacturer using DVD-R recordable media. Almost all DVD players can play DVD-Rs (except for some older models made before 2000) - please consult your owner's manual for formats compatible with your player. These DVD-Rs may not play on all computers or DVD player/recorders. To address this, the manufacturer recommends viewing this product on a DVD player that does not have recording capability.