A look that led to an evening. A mistake he'll regret... FOR THE REST OF HIS LIFE. 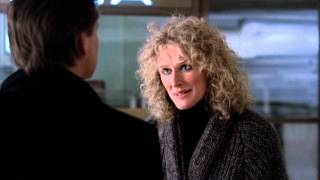 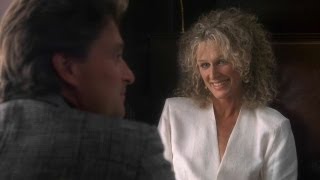 While his wife (Anne Archer) and daughter are out of town, successful attorney Dan Gallagher (Michael Douglas) has a one-night stand with Alex Forrest (Glenn Close), the publishing executive he has just met. He has no idea what he's getting into. Immediately after the encounter, Dan wants to put the experience behind him, but Alex refuses to let go of their relationship. Driven to madness by his rejection, she turns to violently harassing both Dan and his family. This terrifying morality play, which takes the consequences of infidelity to new heights of horror, became one of 1987's biggest box-office successes. Academy Award Nominations: 6, including Best Picture, Best Director, Best Actress--Glenn Close, Best Supporting Actress--Anne Archer, Best (Adapted) Screenplay.

A happily married New York City lawyer engages in a one-night stand while his wife and child are visiting his in-laws. When he tries to end the affair, she refuses, and initial harassment (phone calls in the middle of the night) escalates until she has terrorized the entire family. Soon the lawyer realizes it's either him or her... and he sets the stage for a final showdown.