How far should a teacher go to protect her students? 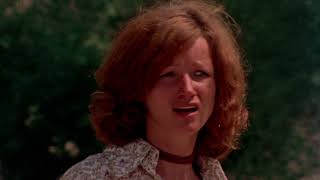 Trip With the Teacher: 1974 Theatrical Trailer

Four high school girls learn some unpleasant lessons at the hands of a psychotic thug in this exploitation drama. Jay (Robert Gribbin) is a nice guy who likes motorcycles that, while on a road trip, comes to the aid of fellow rider Pete (Robert Porter) and his brother Al (Zalman King). Pete has a flat tire and after Jay helps him fix it, he rides off with the brothers to enjoy the desert scenery. The bikers spot another kind of scenery when they pull up beside a school bus with a handful of pretty teenage girls inside. Pam (Susan Russell), Julie (Cathy Worthington), Tina (Jill Voight) and Bobbie (Dina Ousley) have been sent on a private field trip to explore Native American ruins with their teacher Miss Tenney (Brenda Fogarty), and when bus driver Marvin (Jack Driscoll) stops for gas, Jay takes the opportunity to stop and flirt with the girls. Al, however, has a violent streak and has more dangerous games in mind after killing a gas jockey who insulted him. When Jay, Al and Pete discover the bus is stranded in the desert due to a broken fuel pump, they offer to give them a tow into town. But Al instead guides them to an abandoned shack where he proceeds to torture the girls and make his kinky sexual desires known to Miss Tenney. TRIP WITH THE TEACHER features an impressively sleazy performance from Zalman King as Al, years before he became known as a writer and director of erotic dramas such as NINE 1/2 WEEKS, WILD ORCHID and RED SHOE DIARIES.