The misadventures of a friendly gator. 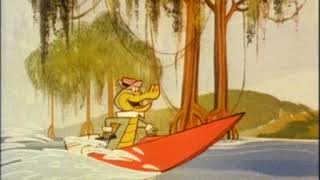 "There's no place like home" is an adage that breezy, affable Wally Gator (voiced by Daws Butler) needs to learn again and again. A true people-person alligator, Wally is driven by his excessive curiosity and bon vivant inclinations to seek out new experiences outside of the city zoo where he hangs his porkpie hat. Donning a variety of hilarious disguises, Wally escapes the care of dedicated zookeeper Twiddle (voiced by Don Messick) only to end up crying, "Oh, fuddle-dee-doo!" as he lands himself in a series of ever more ridiculous (and dangerous) jams. Whether he's getting confused with a dragon by a clan of medievalist monster fighters, almost becoming the final ingredient in a witch's magic potion or becoming a stunt gator in Hollywood action pictures, Wally is always relieved when he finally makes his way back to Twiddle and the zoo...only to saunter off the very next day.
This product is made-on-demand by the manufacturer using DVD-R recordable media. Almost all DVD players can play DVD-Rs (except for some older models made before 2000) - please consult your owner's manual for formats compatible with your player. These DVD-Rs may not play on all computers or DVD player/recorders. To address this, the manufacturer recommends viewing this product on a DVD player that does not have recording capability.