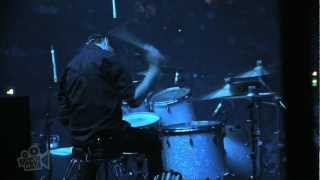 Icehouse: Iva Davies (vocals, guitars), Anthony Smith (keyboards, vocals), Keith Welsh (bass, vocals), John Lloyd (drums, vocals).
Additional personnel: Ian Moss (lead guitar on "Skin"), Michael Hoste (keyboards on "Sons"), Geoff Oakes (saxophones on "Sons").
All songs written by Iva Davies except "Sister," "Boulevarde" and "Skin" (Iva Davies/Michael Hoste).
This is the second go 'round for the band's debut, which first appeared in Australia (their homeland) in 1980 when they were still called Flowers. Rooting themselves beyond their own shores meant changing their name to avoid conflict with another band already called Flowers (incredible) and remixing the album, a rite of passage for Australian releases it seems. So Flowers adopted the album's name, Icehouse, as their own and successfully peddled their brand of Ultravox-influenced music on a burgeoning new wave market hungry for new heroes. The comparisons to Ultravox, Gary Numan, and David Bowie are unavoidable, but so is the fact that the album is chock full of good songs. The danceable "Can't Help Myself" had already established itself as a successful single in Australia; with the subsequent success of "We Can Get Together" (one of the album's few upbeat takes on romance) and a video to support the moody title track (back when videos were a rare and wonderful commodity), the band's international career was effectively launched. Still in its infancy, synth pop's rules of engagement were straightforward: Science fiction imagery was strongly encouraged; vocals that oscillated between detachment and passion were the preferred mode of communication; poppy melodies were a plus; and anything that pointed to the pioneering work of David Bowie was moving in the right direction. Iva Davies follows those rules to the letter, and proves to be a fine songwriter with an ear for mimicry, borrowing large bits of Bowie ("Sons"), Ultravox ("Walls"), and Numan ("Not My Kind"), and adding his own catchy tunes to the concoction. The songs do sound alike -- steady power pop beats amid vaguely European vocals and synthesizers -- but the band's mindset seems to be on writing a hit each time out, which isn't a bad approach at all. Primitive Man is their best record -- its denser production just feels more substantive -- but Icehouse is a mere notch below it, and at least a few notches above most of the new wave wannabes at the time. ~ Dave Connolly