Attila the Hun. Ivan the Terrible. Al Capone. They were all seven once. 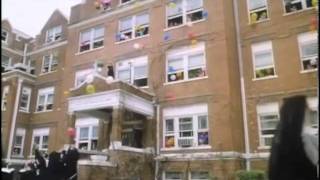 Ben and Flo Healy (John Ritter and Amy Yasbeck) adopt seven-year-old terror Junior (Michael Oliver) in this DENNIS THE MENACE-type comedy. Junior turns an ordinary camping trip, an innocent birthday party and even a little league baseball game into comic nightmares. Ben is just positive that all his new son needs is some loving attention. With Gilbert Gottfried and a pre-SEINFELD Michael Richards (Kramer).

Director Dennis Dugan has appeared on such television shows as MASH, HILL STREET BLUES and THE ROCKFORD FILES, in addition to directing Adam Sandler in BIG DADDY (1999). Writers Scott Alexander and Larry Karaszewski later wrote ED WOOD and THE PEOPLE VS. LARRY FLYNT.

Desperate to keep up with the Joneses, a social-climbing Yuppie couple decide they must have a child at all costs. When biology fails them, they opt for adoption. But the freckled-faced kid they pick up at the local orphanage turns out to be a monster who, among other things, strikes up a running correspondence with an escaped serial killer.