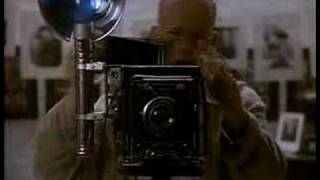 In 1943, as World War II's Battle of Berlin rages, with air raids forcing families into their cellars for shelter and bombs exploding all over the city, Felice Schragenheim (Juliane Köhler) and Lilly Wust (Maria Schrader), fall in love. Director Max Färberböck's AIMEE & JAGUAR tells the true story of this passionate, forbidden love affair, adapted from the 1998 book of the same title by Erica Fischer.

Felice, a dark and beautiful Jewish woman who is constantly in danger of being apprehended by the Gestapo, works for a Nazi newspaper under a false name, feeding what she learns to underground resistance leaders. Lilly, a flowery blond housewife living in bourgeoise comfort, raises 4 little boys, passing the time until her Nazi husband, Gunther, returns from the war. When the two meet, and Felice makes advances, Lilly responds, falling into total submission under Felice's spell. They nickname each other Aimee (Lilly) and Jaguar (Felice), spending every night dancing to popular 40s jazz music with Felice's eccentric lesbian friends, and every day raising the four boys who treat Felice like a second mother. It is not until the end of their affair, when Lilly--and soon thereafter, the authorities--learns that Felice is a Jew, and tragedy befalls the couple.

25%off
Strangler of Blackmoor Castle
$5.95 on Sale
Add to Cart