The Fate Of The World Rests On The Courage Of One Warrior. 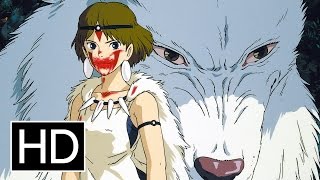 "You cannot alter your fate. However, you can rise to meet it, if you choose."
- Oracle to Ashitaka (Billy Crudup)
"To see with eyes unclouded by hate."
- Ashitaka, explaining to Lady Eboshi (Minnie Driver) why he has traveled to meet the Tatara clan
"Now watch closely everyone. I'm going to show you how to kill a god."
- Lady Eboshi to the hunters
"The Shishigami will never die. He is both life and death itself. He told me to live."
- Ashitaka to San (Claire Danes)

A beautifully realized tale of civilization versus nature, PRINCESS MONONOKE is a true epic by Japan's master animator Hayao Miyazaki. While protecting his village from a rampaging boar-god, the warrior Ashitaka (Billy Crudup) is cursed with a rapidly spreading scar that threatens to end his life. Seeking a cure and a reason for the animal-god's attack, he journeys into the sacred depths of the Great Forest Spirit's realm. On the edge of this once serene forest, however, the Tatara clan have begun to destroy the surrounding land to produce iron. In retaliation, San (Claire Danes), the adopted daughter of the wolf-god Moro (Gillian Anderson), has begun raiding the Tatara fortress to stop their encroachment. Soon Ashitaka is caught in the middle and must stop the war between the humans and the forest dwellers before they destroy each other.

Miyazaki, who was personally responsible for 80,000 of the film's 144,000 hand drawings, uses the story's lush feudal setting as a character unto itself, filling the screen with vast mountainous landscapes and gorgeous wooded glens that recall his early film, NAUSICAÄ OF THE VALLEY OF THE WIND. The film also features battle sequences that are reminiscent of the stunning live action warfare in Akira Kurosawa's RAN. The startlingly fluid movements of these mythological characters are detailed far beyond any other hand-animated production, easily making this one of the most spectacular animated films ever made.

Hayao Miyazaki's epic is a stunning achievement that stands firmly as one of the greatest animated films of all time. PRINCESS MONONOKE tells the story of Ashitaka, a young man who finds himself afflicted with a life-threatening illness, while trying to protect his village from a vicious boar-god. He journeys into a mystical forest to find a cure for his malady, as well as a reason for the boar-god's existence. Once there, he finds himself in the middle of a feud between forest creatures--who want to protect their land--and humans--who want to destroy it. Brilliant animation highlights this action-packed adventure, which is one of the most successful films in the history of Japanese cinema.

Grave of the Fireflies (Blu-ray)
$22.70 Super Savings
Add to Cart

Grave of the Fireflies
$13.30 Super Savings
Add to Cart

Nausicaä of the Valley of the Wind
$17.20 Super Savings
Add to Cart