The legendary epic that's as big as Texas. 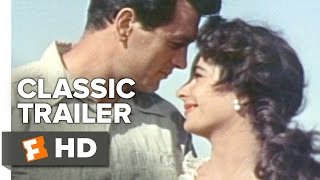 Edna Ferber's best-selling family saga was the source of Stevens' sprawling epic, which stars Rock Hudson, Elizabeth Taylor, and James Dean, in his last film appearance. When Texas cattleman Bick Benedict (Hudson) goes to Virginia in the early 1920s to buy a prize stallion, he falls in love with Leslie Lynnton (Taylor), an aristocratic, independent-minded beauty, and they quickly marry. He takes her back to Reata, his 600,000-acre ranch, where sister Luz (Mercedes McCambridge), the family matriarch, does her best to make Leslie feel unwelcome. Leslie is appalled by the second-class status accorded to women and racist attitudes toward the local Mexicans, neither of which seem to bother her husband. Out of compassion, she befriends surly ranch hand Jett Rink (James Dean), who comes to worship her from afar, envying Bick for both his wealth and his wife. He strikes oil on land bequeathed to him by the deceased Luz and his wealth and power grow apace. As the years pass, the bewildered Bick often finds his children thwarting his wishes and criticizing his beliefs, pushing the millionaire to question his values for the first time in his life. The film's outstanding cast, which also features Dennis Hopper, Sal Mineo, Carroll Baker, Earl Holliman, and Chill Wills, inject vitality into a project that occasionally suffers from longueurs.

An epic examination of the American dream, played out on the spacious, mythic Texas landscape. The story charts Texas's evolution from ranching state to oil capital. In addition, the film explores issues of race relations.
A young cattle baron marries a well-bred Maryland beauty and transplants her to a rustic ranch. The new bride, Leslie Benedict, quickly learns about the divisions between the Americans and the Mexicans, between the privileged and the poor. Her husband retains these prejudices even when his son marries a Mexican-American nurse. Leslie also must contend with a ranchhand who loves her from afar, and who despises her husband's wealth. When the ranchhand strikes oil and also becomes rich, he still fails to win either Leslie or the town's respect.