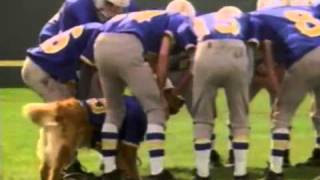 This time out, Buddy, the hoop-shooting, hotshot canine, tackles a new sport - football. When his teenage owner reluctantly becomes the school's new quarterback, Buddy catches the spirit and joins the team. Soon, the two find themselves leading the Timberwolves to the state championship. But victory hopes are sidelined when two sinister Russian circus owners take a bite out of everyone's plans and dognap Buddy for their star attraction.