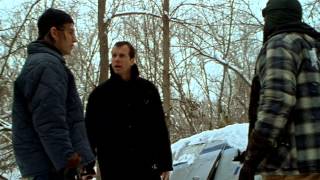 Like the Coen brothers' FARGO, Sam Raimi's A SIMPLE PLAN is an ice-cold neo-noir as chilling and bleak as its snow-covered Minnesota locale. When two brothers, straightlaced family man Hank (Bill Paxton) and simple-minded loser Jacob (Billy Bob Thornton)--along with Jacob's unabashed town-drunk friend Lou (Brent Briscoe)--find 4.4 million dollars inside a crashed plane, they believe they've found the financial answer to all their problems. All they have to do is keep it a secret until the plane is discovered and any investigations are completed. This proves to be easier said than done, however, when the three men (as well as Hank's surprisingly calculating wife, Sarah, played by Bridget Fonda), each with their different reasons, begin to lose trust in the others. When an FBI agent (Gary Cole) comes to town, the tension becomes explosive, peeling away layers of familial resentment and resulting in betrayal, deceit, and, ultimately, murder. Thornton's brilliantly understated and profoundly moving performance was recognized by the Academy with a nomination for Best Supporting Actor, while the taut script, by crime writer Scott B. Smith from his own novel, was also nominated for Best Adapted Screenplay.

No Country for Old Men
$8.40 Super Savings
Add to Cart

The Hand That Rocks the Cradle (DVD)
$6.50 Super Savings
Add to Cart