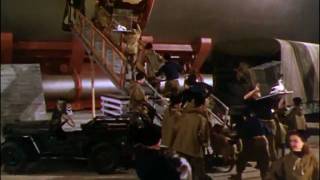 In this beloved George Pal (WAR OF THE WORLDS)-produced sci-fi classic. A dying star hurls through space on a collision course with Earth, with no way to stop it. The hope of the planet's citizens lies in the hands of pilot Dave Randall (Richard Derr) and astronomer Doc Hendron (Larry Keating), who will supervise the construction and flight of an interplanetary craft that will carry a handfull of humans to start the race anew on another planet. Academy Award nominations: 2, including Best (Color) Cinematography. Academy Awards: Best Special Effects.

A scientist concocts a frightening theory about two planets rotating around each other in outer space. He believes that one of the orbs is destined to crash into planet Earth, thus destroying life as we know it. But he also has a plan. The astronomer teams up with a sympathetic pilot, and the two construct a sort of modern space ark. They hope it will save a lucky group of humans by flying them all to safety on the surface of a surviving planet.

New
When Dinosaurs Ruled the Earth
$17.20
Add to Cart