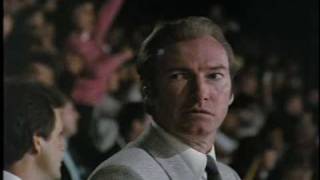 Dean Youngblood (Rob Lowe), a sensitive young farm boy, fights against the odds as he struggles to succeed in the brutal sport of ice hockey. He soon falls in love with the daughter of his no-nonsense coach, which lies at odds with the fighting which is a necessity in the sport for him to be noticed by professional hockey scouts.

Dean Youngblood believes he has what it takes to make it in the no-excuses world of professional ice hockey.
Youngblood leaves behind a humdrum life on his father's farm to fulfill his dream, and that of his blind brother, of becoming a star of the skates and stick.
As he gets the stuffing kicked out of him in the first games and practices, he learns he will need more than ambition and confidence to prove himself in this cold-hearted arena.
After Youngblood beds the coach's daughter and his always-frisky landlord, he finds the courage to persevere.