So Dark the Night (Blu-ray)

1K ratings
Currently Out of Stock: We'll get more as soon as possible
Notify Me When Available
Add to Wishlist
Format:  Blu-ray
sku:  6S9AX
Our customers love us! 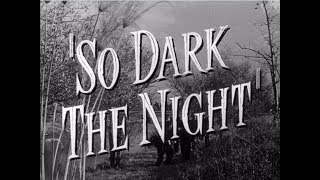 This well-plotted and executed film noir suffered from its lack of star power, but has become something of a cult classic. Steven Geray stars as Henri Cassin, a French detective from the Paris Surete, who takes his first vacation in many years to St. Margot and the country inn of the Michaud family. There, he falls in love with the innkeeper's daughter Nanette (Micheline Cheirel), who is already engaged to a local farmer, Leon Archard (Paul Marion). Urged to pursue a romance with Cassin by her social-climbing mother, Nanette agrees to wed the lawman. Leon pledges that he will never stop pursuing Nanette, and when she runs off, Cassin realizes that his betrothed loves another. When Nanette is found strangled to death, Cassin believes that the obvious suspect is Leon, but soon he is also found murdered. His only clues are some handwriting and a footprint, so Cassin returns to Paris, where his investigative techniques put him on the trail of the killer.