Sometimes, an accident can be an unhappy woman's best friend.

69K ratings
Currently Out of Stock: We'll get more as soon as possible
Notify Me When Available
Add to Wishlist
Format:  DVD
item number:  6G8VR
Also released as:
Dolores Claiborne (Blu-ray) for $20
91% recommend us! 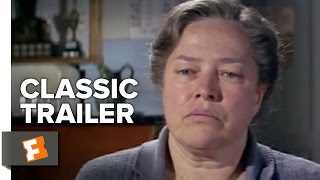 Eighteen years ago, the abusive husband of Dolores Claiborne (Kathy Bates) died under mysterious circumstances. His death was ruled an accident despite the suspicions of police detective John Mackey. Now the elderly woman she has nursed for many years has also died--with Dolores found standing over her body with a rolling pin in her upraised hands--and this time she is accused of murder. Her estranged daughter (Jennifer Jason Leigh), who blames Dolores for her father's death, returns to confront her with her resentment. Are things as cut-and-dried as they seem, or is there more to the story' After years of living a lie, Dolores Claiborne has to finally face the truth with her daughter--or risk losing her for good. Weaving skillfully between past and present, director Taylor Hackford delivers a deceptively adept melodrama, based on a novel by Stephen King and illuminated by Kathy Bates's bravura performance.

Eighteen years after being accused of murdering her husband, a small-town Maine woman again finds herself in the midst of a murder investigation. The only one who can save her from the overzealous investigator who failed to convict her before is her estranged daughter. Based on a novel by Stephen King, the film features a star-making performance by Kathy Bates as the title character, a placid woman who can take only so much before she strikes back. Christopher Plummer is the detective determined to convict this time.

The Hand That Rocks the Cradle
$5.80 Super Savings
Add to Cart

Evil Under the Sun
$8.70 Super Savings
Add to Cart

The Edge of Seventeen (DVD)
$8.40 Super Savings
Add to Cart