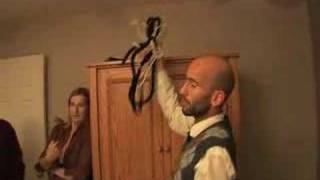 Moving and raw, INTERVENTION SEASON ONE: THEN AND NOW documents the stories of six individuals from the debut season of this series whose powerful addictions nearly ruined their lives.
Alyson was a gifted student and former White House intern until her dependence on alcohol and drugs nearly destroyed her dreams. Vanessa was once a successful actress before compulsive shopping drove her to bankruptcy and despair. Gabe is a gambler who has lost over $500,000 and his home, and Matt was addicted to crack-cocaine. SEASON ONE also tracks the interventions of two meth addicts: Sara, who must save herself for the sake of her daughter, and former rock star Travis, whose early fame resulted in drug use.
Four original episodes trace these individuals' battles with their diseases and the surprise interventions from their families. This special collection also includes follow-up stories that track Alyson, Gabe, Sara, and Travis' roads to recovery.