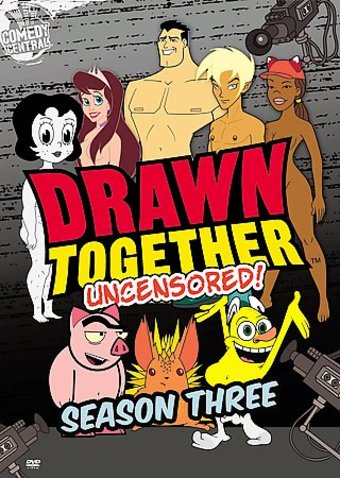 Animated breasts' Check. Animated blood, vomit, and other body fluids' Check. Animated over-the-top graphic violence including death, dismemberment, and humiliation just for the sake of it' Check, check, and check. Yes, it's all part of season three of TV's most outrageous animated reality show--well, actually TV's only animated reality show. Or perhaps, more specifically, TV's only animated mock-reality TV show. Well, whatever it is, season three pushes bad taste, un-PC behavior, and cartoon sex to new limits that have now raised the bar for filthy-mouthed cartoon characters everywhere. And what's more, this is the completely uncensored version. That means all those naughty bits and naughty words that were kept safe from TV viewers sitting in the comfort of their homes have now been unleashed. And with this show's reputation, fans will have only one question about this new material--does it include anymore saucy lesbian hot-tub scenes' They'll just have to wait and see. This collection also includes an array of extras that will not help viewers piece together the show's numerous continuity flaws, but might enlighten them to the creative process. And if that's not enough, there's also a karaoke sing-along!

The Haunted World of El Superbeasto (Blu-ray)
$14.50
Add to Cart